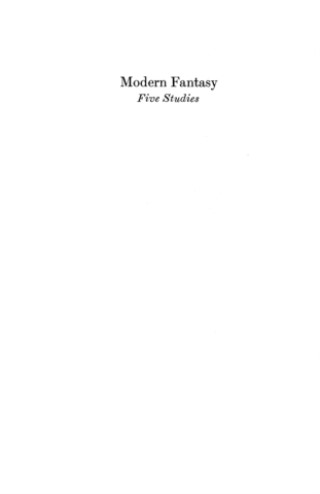 After a decade from 1965 which had seen the growth in Britain and America of an enormous interest in fantasy literature, and a rise in its academic repute from cold to lukewarm, a serious study of the subject seemed long overdue. In this first critical book in its time on modern English fantasy, Colin Manlove surveys a representative group of modern fantasies--in the Victorian period in the children's scientific and Christian fantasy The Water-Babies by Charles Kingsley and the mystical fantasy of the Scottish writer George MacDonald; and from the twentieth century the interplanetary romances of C. S. Lewis, the post-war fantasy of rebellious youth in Mervyn Peake's Gormenghast books, and the quest to avert apocalypse in J. R. R. Tolkien's The Lord of the Rings. The aim with all these works is to show the peculiar literary experiences they offer and to assess their strengths and limitations in relation to wider English literature. In the introduction to his book, Manlove gives a definition of fantasy, marking off the genre from its near neighbors science fiction and "Gothic" or horror story, and distinguishing between fantasies that are serious works of imagination and those that are fanciful or escapist. Each chapter that follows is primarily a literary analysis set in a context of the writer's life, thought, and other works. As the book proceeds, there begins to emerge a picture of the originality and merit of the writers, but at the same time the sense of a division in the purpose of each writer, whereby their works fail to abide by their own laws. In the conclusion to this book Manlove draws the different types of division found into one and argues that the problem is one that is endemic to the writing of modern fantasy.

Colin N. Manlove: Colin Manlove taught at the University of Edinburgh until his retirement in 1993. His books include Modern Fantasy (1975), The Impulse of Fantasy Literature (1983), and Christian Fantasy: From 1200 to the Present (1992). In 2016 he published Scotland's Forgotten Treasure: The Visionary Romances of George MacDonald.