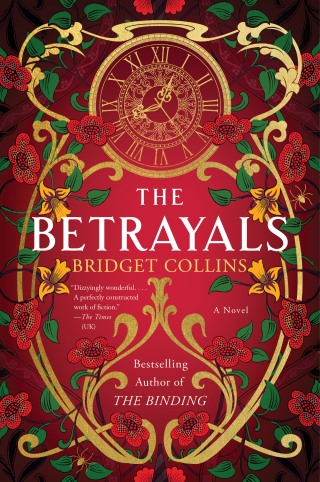 “Dizzyingly wonderful . . . a perfectly constructed work of fiction, with audacious twists . . . Collins plays her own game here with perfect skill.” — The Times (UK)

An intricate and utterly spellbinding literary epic brimming with enchantment, mystery, and dark secrets from the highly acclaimed author of the #1 international bestseller The Binding.

If your life was based on a lie, would you risk it all to tell the truth?

At Montverre, an ancient and elite academy hidden high in the mountains, society’s best and brightest are trained for excellence in the grand jeu—the great game—an arcane and mysterious competition that combines music, art, math, poetry, and philosophy. Léo Martin once excelled at Montverre but lost his passion for scholarly pursuits after a violent tragedy. He turned to politics instead and became a rising star in the ruling party, until a small act of conscience cost him his career. Now he has been exiled back to Montverre, his fate uncertain.

But this rarified world of learning Léo once loved is not the same place he remembers. Once the exclusive bastion of men, Montverre’s most prestigious post is now held by a woman: Claire Dryden, also known as the Magister Ludi, the head of the great game. At first, Léo feels an odd attraction to the magister—a mysterious, eerily familiar connection—though he’s sure they’ve never met before.

As the legendary Midsummer Game approaches—the climax of the academy’s year—long-buried secrets rise to the surface and centuries-old traditions are shockingly overturned.

A highly imaginative and intricately crafted literary epic, The Betrayals confirms Bridget Collins as one of the most inventive and exquisite new voices in speculative fiction.

Bridget Collins trained as an actor at the London Academy of Music and Dramatic Art after reading English at King’s College, Cambridge. She is the author of seven acclaimed books for young adults and has had two plays produced, one at the Edinburgh Festival Fringe. The Binding is her first adult novel. She lives in Kent, United Kingdom.