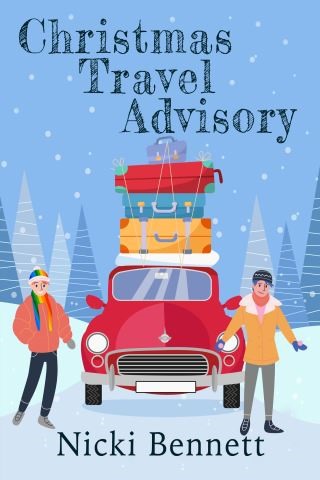 Workaholic investment banker Timothy Wyatt is determined to spend the first Christmas since his divorce with his four-year-old daughter, Megan. Fate—in the form of the largest winter storm system in a decade—seems determined to thwart him. When his flight from Dallas to Chicago is canceled, along with every other flight for at least the next two days, Tim is willing to try any alternative means of transportation to keep from disappointing his daughter yet again. Luckily for Tim, he’s befriended by Zach Whelan, another stranded traveler. Zach is a travel agent, and since he was only planning a solo vacation in Mexico over the holidays, he makes it his mission to get Tim to his daughter in time for Christmas instead. They have three days—how hard can it be?

Nicki Bennett: Growing up in Chicago, Nicki Bennett spent every Saturday at the central library, losing herself in the world of books. A voracious reader, she eventually found it difficult to find enough of the kind of stories she liked to read and decided to start writing them herself.