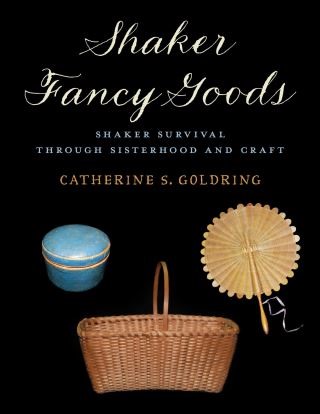 Shaker Fancy Goods tells the story of the Shaker Sisters of the nineteenth and early twentieth century who responded to the economic perils of the Industrial Revolution by inventing a lucrative industry of their own—Fancy Goods, a Victorian term for small adorned household objects made by women for women. Thanks to their work ethic, business savvy, and creativity, the tireless Shaker Sisters turned a seemingly modest trade into the economic engine that sustained their communal way of life, just as the men were abandoning the sect for worldly employment.

Relying on journals and church family records that give voice to the plainspoken accounts of the sisters themselves, the book traces the work they did to establish their principal revenue streams, from designing the products, to producing them by hand (and later by machine, when they could do so without compromising quality) to bringing their handcrafts to market.

Photographs, painstakingly gathered over years of research from museums and private collections, present the best examples of these fancy goods. Fancy goods include the most modest and domestic of items, like the pen wipes that the Sisters shaped into objects such as dolls, mittens, and flowers; or the emeries, pincushions, and needle books lovingly made back in an era when more than a minimal competency in sewing was expected in women; to more substantial purchases like the Dorothy cloaks that were in demand among fashionable women of the world; or the heavy rib-knitted sweaters, cardigans, and pullovers that became popular items among college boys and adventurous women.

Catherine Goldring first became interested in Shaker fancy goods when she owned an antique store in Littleton, Massachusetts. She lives in Natick, Massachusetts, and now works in real estate and teaches cultural studies at MassBay College in Wellesley, Massachusetts.