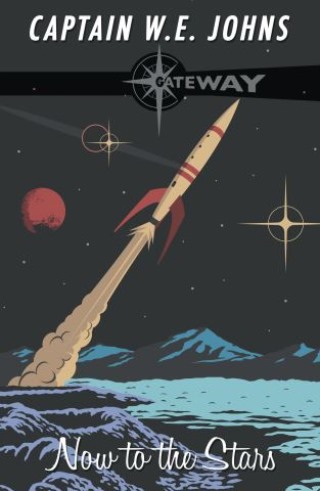 Now to the Stars

Continuing their mission to explore the galaxy and find new worlds for man to conquer, Captain Timothy "Tiger" Clinton, the Professor, Toby Paul and Rex are ready for whatever challenges the stars have to throw at them.

From Mars to Mino, Unkos to Lin, they explore planets and planetoid alike, encountering tree-dwelling creatures, lizard-people, watery worlds and spider-like aliens. As they try to communicate with civilisations trapped under ice, or escape cannibals, no adventure is too tough for Tiger, and there is nothing they can't overcome!

The third book in Captain W. E. Johns' Tiger Clinton space adventure series, Now to the Stars brings yet more action and adventure from the legendary creator of Biggles.

Captain W. E. Johns (1893-1968)
A World War One pilot, Captain Johns started flying as part of the Royal Flying Corps before the RAF was even formed, and flew a number of missions into Germany before being shot down and taken as a POW in September 1918. After the war ended, he remained in the RAF in recruitment and then as a reservist before relinquishing his commission in 1931. He published his first Biggles book the following year.

The renowned flying ace Biggles is probably his most well-known character, however throughout Johns' 46-year writing career (from 1922 until his death) he wrote over 160 books, including other novels and non-fiction. His first science fiction novel, Kings of Space, was published in 1954 and introduced Captain "Tiger" Clinton to the world. A series of nine further novels followed.