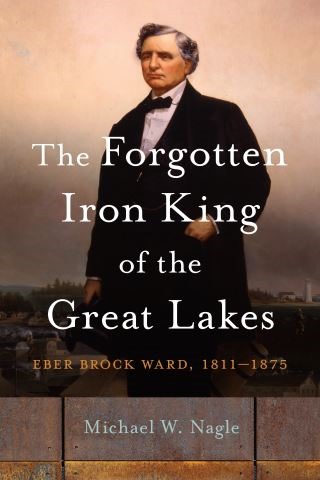 The Forgotten Iron King of the Great Lakes

Eber Brock Ward (1811–1875) began his career as a cabin boy on his uncle’s sailing vessels, but when he died in 1875, he was the wealthiest man in Michigan. His business activities were vast and innovative. Ward was engaged in the steamboat, railroad, lumber, mining, and iron and steel industries. In 1864, his facility near Detroit became the first in the nation to produce steel using the more efficient Bessemer method. Michael W. Nagle demonstrates how much of Ward’s success was due to his ability to vertically integrate his business operations, which were undertaken decades before other more famous moguls, such as Andrew Carnegie and John D. Rockefeller. And yet, despite his countless successes, Ward’s life was filled with ruthless competition, labor conflict, familial dispute, and scandal. Nagle makes extensive use of Ward’s correspondence, business records, contemporary newspaper accounts, and other archival material to craft a balanced profile of this fascinating figure whose actions influenced the history and culture of the Great Lakes and beyond.