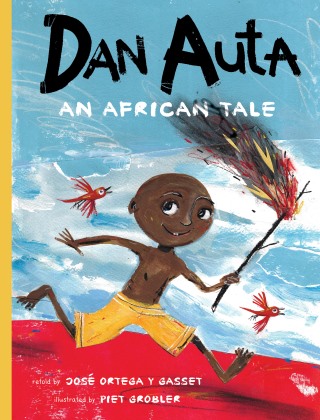 Kids 9 to 12 will laugh out loud while reading this adventurous graphic novel, which brings an African folk tale to life for a new audience.

When Sarra’s parents die, they leave her with an important warning: never let Dan Auta, her little brother, cry. But Dan Auta loves to make trouble. He hitches a ride on the back of a bird, pokes the eye of the king’s son, and even pees on the king’s head. Making sure he doesn’t cry is much harder than Sarra thought!

But Dan Auta’s unbridled curiosity and determination may be exactly what everyone needs: a terrible monster called the Dodo is attacking the city… and Dan Auta is the only one with the courage to take him on. Dan Auta features:

Piet Grobler is a world-renowned, award-winning South African illustrator of over 80 books. He grew up on a farm in Limpopo, South Africa and now lives in Portugal.

Dr. Federico Allodi is a retired professor of psychiatry at the University of Toronto, an author and a poet. He lives in Toronto.

Minab W. Yetbarek is a translator, interpreter, and writer of Eritrean origin. He volunteers for humanitarian interpretation organizations and lives in Vancouver.