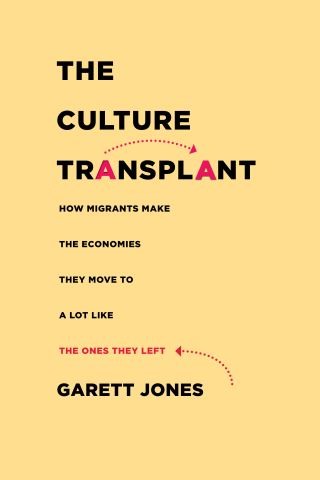 A provocative new analysis of immigration's long-term effects on a nation's economy and culture.

Over the last two decades, as economists began using big datasets and modern computing power to reveal the sources of national prosperity, their statistical results kept pointing toward the power of culture to drive the wealth of nations. In The Culture Transplant, Garett Jones documents the cultural foundations of cross-country income differences, showing that immigrants import cultural attitudes from their homelands—toward saving, toward trust, and toward the role of government—that persist for decades, and likely for centuries, in their new national homes. Full assimilation in a generation or two, Jones reports, is a myth. And the cultural traits migrants bring to their new homes have enduring effects upon a nation's economic potential.

Built upon mainstream, well-reviewed academic research that hasn't pierced the public consciousness, this book offers a compelling refutation of an unspoken consensus that a nation's economic and political institutions won't be changed by immigration. Jones refutes the common view that we can discuss migration policy without considering whether migration can, over a few generations, substantially transform the economic and political institutions of a nation. And since most of the world's technological innovations come from just a handful of nations, Jones concludes, the entire world has a stake in whether migration policy will help or hurt the quality of government and thus the quality of scientific breakthroughs in those rare innovation powerhouses.

Garett Jones: Garett Jones is Associate Professor of Economics at the Center for Study of Public Choice, George Mason University. He is the author of 10% Less Democracy: Why You Should Trust Elites a Little More and the Masses a Little Less (Stanford, 2020) and Hive Mind: How Your Nation's IQ Matters So Much More Than Your Own (Stanford, 2015).