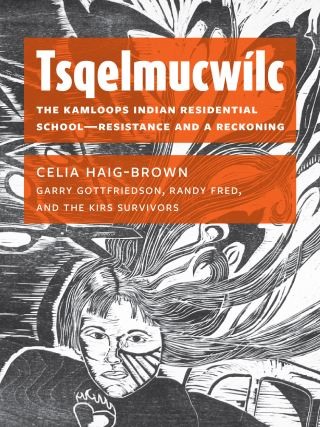 The Kamloops Indian Residential School―Resistance and a Reckoning

In May 2021, the world was shocked by the news of the detection of 215 unmarked graves on the grounds of the former Kamloops Indian Residential School (KIRS) in British Columbia, Canada. Ground-penetrating radar established the deaths of students as young as three in the infamous residential school system, where children were systematically removed from their families and brought to the schools. At these Christian-run and government-supported institutions, they were subjected to physical, mental and sexual abuse while their Indigenous languages and traditions were stifled and denounced. The egregious abuses suffered at residential schools everywhere created a multi-generational legacy of trauma for those who survived and, as the 2021 discoveries confirmed, death for too many.

“Tsquelmucwílc” (pronounced cha-CAL-mux-weel) is a Secwepemc phrase loosely translated as “We return to being human again.” Tsqelmucwílc is the story of those who survived the Kamloops Indian Residential School, based on the book Resistance and Renewal, a groundbreaking history of the school published in 1988―the first book on residential schools ever published in Canada. Tsqelmucwílc includes the original text as well as new material by the original book’s author, Celia Haig-Brown; essays by Secwepemc poet and KIRS survivor Garry Gottfriedson and Nuu-Chah-Nulth elder and residential school survivor Randy Fred; and first-hand reminiscences by other survivors of KIRS as well as their children on their experience of KIRS and the impact of their residential school trauma throughout their lives.

Read both within and outside the context of the grim 2021 discoveries, Tsqelmucwílc is a tragic story in the history of Indigenous peoples of the indignities suffered at the hands of their colonizers, but it is equally a remarkable tale of Indigenous survival, resilience, and courage.

This publication meets the EPUB Accessibility requirements and it also meets the Web Content Accessibility Guidelines (WCAG-AA). It is screen-reader friendly and is accessible to persons with disabilities. A book with many images, which is defined with accessible structural markup. This book contains various accessibility features such as alternative text for images, table of contents, page-list, landmark, reading order and semantic structure.

Randy Fred is an Elder of Tseshaht First Nation who survived nine years at the Alberni Indian Residential School. After a lifelong career in multi-media, he is currently the Nuu-chah-nulth Elder at Vancouver Island University.