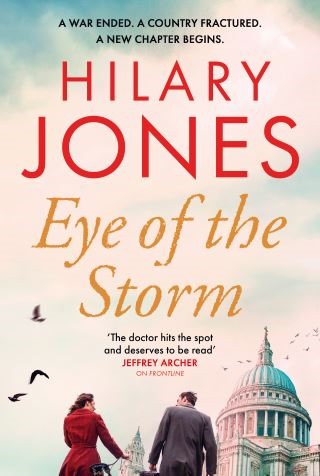 Eye of the Storm

The 1918 armistice has ended the war in Europe. But as the 1920s roars to life, it is an age of social change, excess, shellshock and ghosts.

Having shown courage and strength on the battlefield, Will and Grace are back in the UK and working at the cutting edge of modern medicine. At every turn they see a country in flux. The postwar years are heady and unpredictable. Many of their contemporaries are following serious paths, committing to causes of the day – workers' rights, votes for women, an independent Ireland. Others seek refuge in more earthly and bohemian pleasures. But as young parents and practising medics, they have – more than anything – duties of care and compassion that cannot be ignored.

Hilary Jones's sequel to his bestselling 2021 novel Frontline chronicles some of the defining events of the 20th century as seen through the eyes of a preeminent medical family.

Hilary Jones: Hilary Jones is a General Practitioner and regular contributor to multiple newspapers and television shows. He is a well-known and trusted face to millions in the UK.